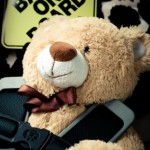 Most car safety seats work by holding your child snuggly in place during a collision, and by absorbing or redirecting the energy in a collision away from your child’s body. Quality car seats also drop the child vertically to redirect the energy from the collision, and prevent the child from striking the backs of the front seats. Much like the bumper of a car, the car seat is designed with materials that break down, and in so doing, reduce the likelihood of injury to your child.

I am a big fan of the Britax child safety seats. These seats are known as some of the safest car seats available, and are generally highly ranked by consumer reports. A quick review of the features will help to understand how car seats function in general to protect your child. First, the seats generally are plastic with a metal reinforced body. Britax, like most other brands utilize energy absorbent foam throughout the seat. Also, like most other brands they use a five point harness that is designed to keep the child in place. Some more technologically advanced features you may find are a staged tether. This device is a strap, much like a seatbelt. It attaches to the top of the seat and to a built-in latch on the rear deck of a passenger car or SUV. Upon impact, the latch stretches, slowing the forward deceleration of the car seat. In addition, it purposefully “gives” at several points to allow the car seat to move forward, but without snapping it back. The seats also have soft “cells,” like a beehive, that sit below the child. In the event of an impact, these cells essentially rupture, and the seat is directed downward instead of simply forward. This absorbs energy and also prevents the child and seat from moving forward and striking the back of the front seats.

It is clear from the technology that once the seats are used, and the energy is absorbed, the seat is damaged. The more energy the seat absorbs, the less energy is directed to your child. Much like an airbag, however, once the safety device is used, it is spent, and cannot be used again. After the seatbelt-like structures and tether have been stretched and after the foam and cells have been damaged, the seat will never function the same again, it is not as safe, and must be replaced.

Insurers generally don’t volunteer this information, but your car seat is covered by your property damage coverage. That means that you are entitled to a new car seat after an accident. Don’t let the insurer tell you that you don’t need one or that it is not covered, it is. Expect, however, for the insurer to collect the old car seat to take it off the market and prevent it from being used in the future.

Remember that any time you have a moderate to severe motor vehicle collision, you MUST replace your car seat.