Close Menu
Maryland Workers' Compensation Attorneys > Blog > Auto Accidents > What Does It Mean When A Driver Receives A Citation After A Collision?

What Does It Mean When A Driver Receives A Citation After A Collision? 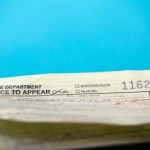 After a motor vehicle collision, one or even both of the drivers may receive a citation. Both drivers invariably ask the same question:

“What does this mean in a future lawsuit?” The answer depends what the driver does after the citation.

The law in Maryland is that a guilty plea is an admission against interest. This means that if a person pleads guilty to a crime or citation, it can be used against her later. She is permitted to appear in court at a later civil trial and explain why she plead guilty, but she cannot claim that she did not commit the crime. There are essentially three possibilities:

The Driver Pays The Citation

The fact that a driver paid her traffic citation is not considered an admission of guilt in Maryland. Drivers pay citations for many reasons unrelated to guilt. For example, a driver may not wish to take an entire day off of work to fight a $50 ticket; or, she may be scared to appear in Court; or she may simply have “better things to do.” The Legislature has given her the option of simply paying the ticket, accepting any related points, and not having to appear. For public policy reason, it cannot be used against her in a later civil trial.

The Driver Appears in Court and Pleads Not Guilty

If the driver appears in Court and pleads not guilty, but is found guilty by the judge, the guilty verdict cannot be used against her in a later civil trial. The basis for this is that there is less at stake in a simple traffic citation hearing than a civil trial for damages. Many drivers will defend a traffic citation much less vigorously than a civil trial. The result is that it would be unfair to bind her to a guilty verdict in traffic court, where she plead not guilty. This is also a public policy decision.

The Driver Appears in Court and Pleads Guilty

This is what we are hoping for. If the driver appears in Court and pleads guilty, it is an admission that she did whatever it is she was cited for. It can be used in Court in a civil trial, and is admissible for any relevant purpose. Although this is not an automatic win on liability, it is as close as you get.

No matter what the plea, if the driver appears in Court and gives any testimony, that testimony can be used in a subsequent civil trial. It does not matter what the plea is. For example, if the driver is charged with running a red light, and then pleads not guilty, but admits to running the red light in her testimony, a guilty verdict cannot be used against her. Her testimony, nonetheless, that she ran the red light can be used against her.

Any time there is testimony in Court related to one of my civil cases, I order a copy of the recording from the Court. A simple reading of the docket is insufficient to indicate actual guilt. Even if the opposing driver pleads not guilty, I can often find useable testimony from the traffic Court session to help further my client’s civil case. It is amazing what the cited driver “forgets” about her traffic Court testimony; having the traffic session on CD can change the outcome of a civil case.

By Berman | Sobin | Gross LLP | Posted on August 19, 2013 Tags: Laws and Regulations, Maryland Car Insurance
« So, You Ignored My Previous Article And Got Hit By A Car
How Does The Social Security Administration Evaluate Disability Claims Based On Fibromyalgia? »