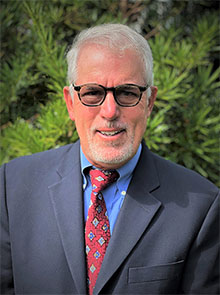 In his spare time Mike loves to play golf, and root for his favorite sports teams, especially the Washington Capitals and the Washington Nationals. He also loves skiing and is always looking for an opportunity to go hiking, especially in the company of his family or with Ruby, his half Mastiff, half Newfoundland, gentle giant of a dog.

Michael H. Feldman, who is now retired, was the partner at Berman | Sobin | Gross LLP who directed our complex litigation. For over 35 years, Mr. Feldman has focused on medical malpractice, products liability, construction, and other serious injury litigation. He was in the forefront of transfusion-associated AIDS litigation, and one of his trials was featured in the book Bad Blood: Crisis in the American Red Cross, by Judith Reitman. He has been given the highest rating in legal ability and ethical standards by peer review through Martindale-Hubbell, and has been named a Super Lawyer for both Maryland and DC and was listed as one of the State’s Top Attorneys by Baltimore Magazine. He also has an AVVO rating of 10 in medical malpractice and personal injury, the highest rating available. In 1998, Mr. Feldman was elected to the prestigious position of President of the Washington D.C. Trial Lawyers Association. In 2016, Michael was named the Trial Lawyer of the Year by the Washington D.C. Trial Lawyers Association

Michael Feldman has obtained numerous verdicts and settlements in excess of a million dollars on behalf of his injured clients. Recently, in a medical malpractice case, he received what was reported as the largest verdict in the history of Allegany County, MD. Additionally, he obtained a jury verdict of over a million dollars in the District of Columbia for a woman involved in a minor impact auto accident.He was also one of the lead attorneys in the June 2009 METRO subway crash that resulted in nine (9) fatalities. His verdict in Montgomery County of $44.1 million in a medical negligence case, was the largest injury verdict in county history, along with one of the largest verdicts in the state of Maryland.